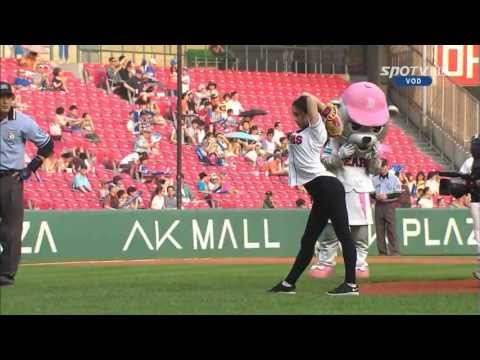 Before the Doosan Bears/Samsung Lions game at Jamsil Stadium in Seoul on July 5th, former South Korean national team rhythmic gymnast Shin Soo-ji (???) threw out the first pitch.In December 2013, Shin Soo-ji peformed this pitch again while wearing a dress at a baseball awards show. It can be seen at: http://youtu.be/nGglI5j1Us0[Update]On July 10th, Shin Soo-ji had a photo shoot with one of the local Korean papers. Pictures from that photo shoot can be

Can I Hit 10 Home Runs Before I Make 10 Free Throws? IRL Sports Challenge

When You Let Your Kid Play Ball in the House, 4 year-old Baseball Christian Haupt www.cathy-byrd.com